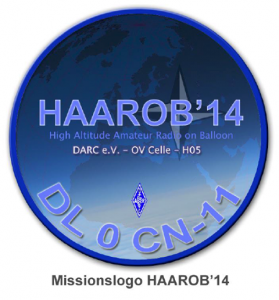 In the tradition of the High Altitude Amateur Radio on Bord Balloon Projects of 2010 and 2012 the Amateur Radio operators of the DARC Ortsverband H05 (local subsection in District H of German Amateur Radio Club) will be performing 2 Balloon launches on Saturday, July 26 2014.

The payloads which will be attached to Helium filled Latex Balloons (Type: Totex1000) will transmit live telemetry data via APRS (Automatic-Position-Reporting-System) and a voice beacon. The telemetry data will include the external and internal temperature, air pressure, altitude and battery voltage.

Whereas the second launch will be using the same payload technology as in 2012 to create High-Definition Photo and Video footage of the flight, the first payload is an entirely newly constructed tracker, mainly developed by Thorsten, DL9OBM.

The newly developed tracker is using a PIC32F250 as micro-controller, which is running at 40MHz. This micro-controller collects the data from the various sensors, there included a Linksprite Camera which takes pictures at a size of 640*480 pixels and is interfaced through a 38k UART TTL connection. The GPS Module used is a Graf DFM-06, this module was recycled from a Graw Radiosonde. This module is known to operate reliably at altitudes above 18000 ft The TX Module is a Radiometrix TX2M which will be switching between the two frequencies in order to permit voice transmission on 145.200 MHz and APRS on 144.800 MHz.

Additionally to the payload carrying the photo and video equipment, the second launch will be used to carry a payload developed by students participating in the jugend forscht work-group of the “Ernestinum Gymnasium”. This project is considered as a starter project for the participation in the famous “jugend forscht” competition and a perfect example for the good cooperation between local radio amateurs and the school.
The school project consists of sensors and a GPS module connected to an Arduino-Nano micro-controller which was programmed by the students. The data recorded during the flight will be logged to an SD-Card to permit later analysis.

Both balloons are expected to reach an altitude of 30 km or more. The flight time will be 2-3 hours.

Tracking of the balloons can be performed through direct reception of the voice beacon or following the APRS positions published to http://aprs.fi

A brief summary of the launches:

This entry was posted in Uncategorized. Bookmark the permalink.